What is Cinema Monolith?

Well, it’s not only the name of this movie review site, but also the name I gave to the revolving DVD and Blu-ray storage tower I purchased a few years back, a four-sided, 756-film-capacity monstrosity from where most of the the reviews on this blog will originate. After getting the thing assembled and stocked, I got the idea that it might be fun to launch a blog site and write reviews of the nearly 800 movies I own, and after days spent test-driving such eclectic site titles as The Torben Film Society, Filmcat, Midnight Movie Train, and The Film Goose, I finally realized, this had to be about the tower. And with that, while searching the internet for imposing synonyms for the word (such as citadel, fortress, spire, and turret), I finally settled on ‘monolith’, and thus, Cinema Monolith was born.

of the reviews are from movies I own, though a small percentage will also come from theatrical viewings, cable screenings, and discs I’m able to borrow from family and friends. Occasionally I’ll throw an article or personal account into the mix to keep things fresh, such as my favorite movies in a particular category (Todd’s Top 5), my memories of a bygone theater I’d once frequented (Cinema Graveyard), or any one of a million mind-boggling experiences I’ve had in the film world (Celluloid Mayhem).

Of course, reviewing DVDs and Blu-rays that reside on the Monolith also means that my reviews come from films and genres I love to watch, so hopefully such categories as film noir, Bond, baseball, schlock, Eastwood, classics, Hitchcock, and ’80s teen comedies won’t scare you off, but instead will keep you coming back for more. Feel free to comment on any review or article I post, but please keep it clean and casual; I’m here to have fun, not suffer through attacks and indignities because I happen to find The Adventures of Buckaroo Banzai a well-made and enjoyable movie.

Who is the Curator of the Monolith? 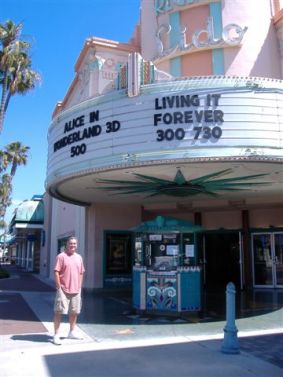 My name is Todd, I’m 59 years old, and I currently reside in Peoria, Arizona, where I spend my free time doing what I enjoy most, which is watching movies, bike riding, reading mystery novels, and replaying the entire 1978 baseball season using a board game called Statis Pro. The earliest movie I can remember seeing is Blackbeard’s Ghost at the Cinema Paramount in Fremont, Ohio when I was five years old, and my favorite movie of all time is Jaws, which I saw five times in theaters when it was first released in 1975. I love visiting and watching movies at old cinemas, wherever I’m able enough to find them, and in 1989 my brother and I were fortunate enough to be at the Kachina in Scottsdale, Arizona for their very last screening ever. Many years ago I began writing capsule movie reviews for friends and family, which I typed, printed, and bound in a yearly annual, until it was suggested that, to save myself time and money, I post these reviews on a free blogging site, a concept that had never crossed my mind previously. From there my two friends and I created The Derby Killer film review site, and a year later my own site was spawned, Cinema Monolith, which made its debut on January 31, 2014.

I use a 0-10 rating system, with 10 of course being best, and 0 being absolute garbage. Previously I used a 5-star system for my movie review book, but for the CM site I decided to go with a 10-point numerical system, which to me was a bit more clean, crisp, and precise.

• If you see a small Monolith icon at the top-right of a review page, it means I own the DVD of the movie reviewed. A film reel means I saw the film at a theater, a red-and-blue shield denotes a movie from my Project 82 page, and a ghoulish face with a top hat references a movie I watched on the late-night horror show Svengoolie.
• Unfortunately, I won’t be reviewing short subjects, concert videos, or TV series. Apologies, fans of Adam-12.
• I reference IMDb for release dates, MPAA rating, and cast and crew listings.
• For a film’s release date, I go with nationwide release, straight-to-video debuts, or original ‘made-for-television’ airdates. For foreign films, I use ‘country of origin’ release dates.
• If there’s question about a film’s title, I’ll use the title card shown at the beginning of the film itself.
• For a film’s MPAA rating, I use the original rating; therefore, some films in the 1960s and 1970s will have an ‘M’ or ‘GP’ rating. Also, the ratings system did not go into affect until 1968, so any film released before then will have a ‘Not rated’ designation.
• For genre, I go with the common denominator I find on IMDb, Wikipedia, and my own common sense.
• Sometimes the film’s one-sheet poster I use on the review page is different from the one that is commonly recognized; at times, I’ll use the version I saw at theaters (such as a teaser poster) that first drew me to the film, or the one I find the most aesthetically pleasing.
• The Monolith is made of a durable wood laminate, not a black, non-reflective, indestructible solid found in space.
• I welcome any and all requests to fix mistakes, typos, and broken links. Please let me know!

• My brother Scott and my friend Julie for offering feedback and advice on the design of Cinema Monolith.
• Zana Ikeda for her stellar work on the ‘Todd’s Dark Desk of Noir’ photo.
• The gang at RedKid (www.redkid.net) for their sign generator page, where I made the ‘CM Drive-In’ headers.
• For anyone who has allowed me—wittingly and unwittingly—to use photos, posters, and images on this site.
• Joe and Steve, my co-reviewers on The Derby Killer, for being cool when I moved on to my own blog.

24 comments on “About the Monolith”