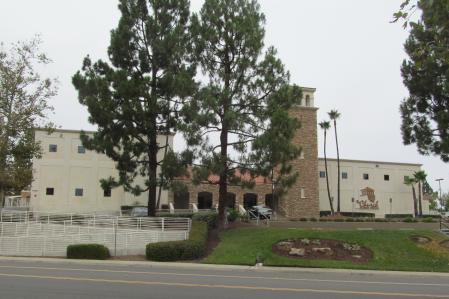 The first entry in my Cinema Graveyard series, and without a doubt the most frequently visited and most memory-filled of all the cinemas, drive-ins, and movie palaces I’ve ever been to: the Mann Rancho Bernardo 6, a six-screen multiplex located in the small community where I grew up in the ’70s and ’80s, about forty minutes north of San Diego, California. The theater opened on June 20, 1980, and it was the only time in my life I’d been to a theater for its grand opening celebration.

The movie-loving citizens of RB were out in full force that evening looking to be a part of the spotlit festivities, but strangely enough, only three of those six screens were open for business that day. The three on the right of the lobby were finished and ready to go, but the three on the left side were still being worked on, and that entire side of the building was sealed off by a clear plastic tarp. And as the ad to the right proves, only three movies were playing that night; my Dad and I went to see The Blues Brothers, while my Mom, my brother Scott, and my sister Kelly opted for the Disney re-release of Mary Poppins.

It would be the first of over 150 movies I’d see at the theater over a twenty-year span, and during its heyday it was the place to be if you lived in Rancho Bernardo, where you could meet up with friends, spot people you knew from the neighborhood, and get to know the theater staff by name…many of whom I already knew from high school. I can think of maybe a hundred wonderful memories from my many days and nights spent at the RB6, but here are just a few that immediately come to mind:

• Of the three times I’ve sat through a movie twice in one day, two of those occurred at the RB6: Xanadu in 1980 and Forbidden World in 1982.

• During a special midnight screening of a Three Stooges marathon in 1981, a riot nearly broke out when a packed house of frustrated fans realized that the Stooges shorts being shown were all featuring Shemp, and not Curly.

• I saw Return of the Jedi there on its first day of release, sitting with my Dad and Scott in the back row of a packed auditorium; if I remember correctly, we were there because the movie wasn’t playing at any of the big single-screen theaters in San Diego.

• For a very short time, the theater tried having employees hawk snacks and candy at the front row of each auditorium prior to the show, holding a tray on a neck strap like cigarette girls of the 1950s. My friend Brent’s brother, who was working at the RB6 on a night we were there, begged us beforehand to buy something from him, so he wouldn’t be embarrassed while standing helpless in front of a potentially hostile or derisive crowd. We complied, and no doubt embarrassed him anyway by enthusiastically waving our hands and shouting loudly for popcorn and drinks.

• I saw Back to the Future for the third time in 1985, on October 26th, and the crowded auditorium reacted with applause when we saw the exact same date on the dashboard of the DeLorean, when Marty McFly returned to 1985 from his trip to the past.

• One of my first dates with my girlfriend Julie was at the RB6, for a nighttime screening of A Few Good Men in 1993.

• And during my two decades of visiting the RB6, I only saw two celebrities ever arrive there to see a movie: former San Diego Padres pitcher Randy Jones and My Three Sons actor William Demerest. Both bypassed the long lines that led from the ticket windows down the steps and into the passenger drop-off zone, and headed straight inside to the lobby instead, apparently not needing tickets to gain admission.

By 1997, the theater had changed ownership, and was being operated by Silver Cinemas as a discount multiplex, at first offering movies and concessions for just a dollar each, then boosting the price of a ticket to two dollars a year later. By this time, the theater was slowly dying, now showing second-run films that were scratched and worn, offering only a handful of snack bar items, and suffering from dwindling attendance thanks to a flood of new multiplexes opening in neighboring cities. I went to quite a few movies there during its last three years, mostly with my friend Joe, who like my brother had once worked at the RB6; there were bigger and more modern theaters in the area, but every now and then it was fun to revisit the past…especially if it only cost two bucks.

The last movie I ever saw at the RB6 was on my birthday in January of 2000, when I went alone on a Monday night to see the latest Bond flick The World is Not Enough. However, my last visit to the theater took place the following month, when Joe and I met there to see October Sky. Not many patrons were at the theater that night, and only a handful were there to see that particular movie. As we all soon found out, the projector was somehow damaged, and the images were so blurred and ‘ghosting’ that we could barely make out what was happening on-screen. After a few minutes with no change, Joe and I got up to leave…oddly, the only ones to get up and leave. We found the manager in the empty lobby and informed him of the problem, which he said he was already aware of (yet he was still selling tickets!), and we chatted with him for a while about the hassles he’d had with the projection and various prints, and the state of the theater in general. Without prompting, he gave us refunds, which looking back makes me feel a little sad, and now I wish I’d told him no, and kept the keepsake ticket for myself instead.

I never made it back to the RB6, and three months later it had quietly closed, along with the Edwards San Marcos 6 in nearby Escondido. I don’t know how long the place remained empty, but a church is there now in the same building, the exterior only slightly modified: windows have been added around the exterior, and for some reason a stone tower has been attached to the front facade. I’ve had a few opportunities since then to step inside and take a look around, but have always chosen not to, knowing the interior has no doubt changed, and wanting instead to keep my memories of my visits there intact.