After the Mann Rancho Bernardo 6, this was probably my most frequented theater when I was growing up in San Diego in the ’70s and ’80s: the Vineyard Twin Cinema in Escondido, California. Just a short drive north from where I lived in Rancho Bernardo, this – along with the RB6, the Poway Playhouse, and the Plaza Twin – was the closest theater available to me before a surge of multiplexes in the area crushed these little movie houses out of existence in the 1990s.

The Vineyard Twin – and the little shopping center it was part of – opened in 1974, and both were unique in that the entire structure was made of natural wood, giving it the look and feel of an aged wine barrel. Our family would visit the Vineyard many times throughout the 1970s, and when I acquired my driver’s license in the early ’80s, I become a more frequent visitor to the location, and then even more so in 1986, when I moved to the apartment complex directly behind it, just a short five-minute walk away.

And not only was it a decent place to go for movies, but it was just a pleasant place to visit overall, whether it was to grab a bite to eat before the show at Acapulco or Grand Central Deli, or enjoy some ice cream afterwards at Swenson’s next door. There was also a Book Works book store, a board game shop called The Game Keeper, a Stanley Andrews sporting goods, a place to buy re-soleable sneakers called, of all things, Second Sole, and most importantly for me, a Licorice Pizza outlet, where I purchased most of the records I owned throughout the eighties. I especially liked going there at night, where I could just stroll around and enjoy the shops, the lights, and the cool evening atmosphere.

In the black-and-white photo above, you can see the Vineyard Twin on the left side of the shopping center, where the silhouettes of Charlie Chaplin, Laurel & Hardy, and W.C. Fields can be seen on the cinema’s left wall. In fact, this was the only photograph of the Vineyard Twin I could find on-line; the photo you see at the top of this post is actually that of the Mexican restaurant Acapulco, which I’d taken a decade ago when I traveled to Escondido in hopes of getting one of the theater, and discovered I was far too late. By that time, the entire shopping complex was gone, save for that lone restaurant space, which sat forlorn and unoccupied for years (it can be seen in the bottom-left corner of the shopping center in the old photo). From what I hear, it’s gone now as well, leaving nothing of the Vineyard but a parking lot.

By my count, beginning with Airport ’75 in late-1974, I saw 36 movies at the Vineyard Twin during its quarter-century of existence, which doesn’t seem like much when compared to the 150 or so I saw at the RB6 during that time. But that Vineyard total is taken mostly from memory, and is deceptively low; for many years the theater distributed the old-style ‘construction paper’ tickets that were torn in half upon entry, and which never included the movie’s title or date the film was seen. This of course made it impossible for me to later track and verify what I’d seen there, or even if I’d seen a particular movie there, so I had to trust my memory, or what I could find in journals or notes I’d written years earlier.

But I do carry with me a handful of memories from those Vineyard Twin visits, which of course need no date or time stamp, and for me were equally as fond as those remembered from the Rancho Bernardo 6:

• My Dad and I went to see Jaws there in 1975, after having seen it a few times already, and we arrived early for our evening show. The guy at the ticket window asked if we wanted to go in right then, in the middle of the current show, instead of waiting outside, and then just stay seated afterwards for the screening we’d bought tickets for. So we did, and decided it might be fun, at certain key scary moments, to not watch the movie, but to watch the audience reactions instead. And it was fun, seeing a few hundred very-still patrons suddenly screaming and jumping a mile off their seats.

• My brother and I had to sit in the very front row for a crowded screening of Close Encounters of the Third Kind, my first time ever doing so, and we had to crane our heads back to see the screen, which we basically only saw the right half of; I was never again so close to a screen to watch a movie as I was that night for CE3K.

• My first theatrical nude scene took place at the Vineyard Twin, when Jenny Agutter bared all for my 13-year-old self in Logan’s Run.

• I saw my first and only current-release Hitchcock film there, which also happened to be his last: Family Plot. I also saw John Wayne’s last there, The Shootist, as well as my first Bond at a theater, The Spy Who Loved Me.

• I once went on a date there with not one but two girls at the same time, my Vons co-workers Kerry and Deanna, when the three of us went to see the John Travolta and Olivia Newton-John romance comedy Two of a Kind. I admit, it wasn’t the greatest movie to take a pair of girls to see on a first date, but believe me, I wasn’t complaining.

• After seeing Big Trouble in Little China with my brother in the summer of 1986, I decided I wanted to introduce my friend Steve to it as well, so a week or two later we headed out to the Vineyard for a late-afternoon screening, with a stop at a nearby Straw Hat Pizza for dinner beforehand. We’d allowed ourselves plenty of time to eat prior to the show, but after waiting at our table for nearly an hour, and still no pizza, we decided dinner would have to be skipped. We went to the counter to get our money back and head out, but were now told the pizza had just come out of the oven and was ready; with no time eat it there, we took it to-go, and ate the mouth-burning slices straight from the box while standing in line outside the theater, a dining concept I’d never tried before, and would never try again. 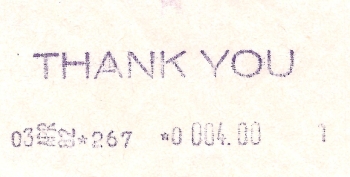 • A co-worker friend of mine from the hospital where I worked, Dave, joined me one evening at the Vineyard  Twin for a screening of the Steven Seagal action film Fire Down Below. We sat in the back row, where behind us – running parallel to our row of seats – a wide area led from the auditorium entrance to our left to the center aisle on our right. A few minutes after the lights went down and the movie had started, we heard a commotion to our left…odd slapping sounds, and hushed exclamations of surprise. As soon as I turned to look, a pair of hands were suddenly slapping the head and shoulders of Dave, and then of mine! It confused me at first, then I realized what was happening: an old guy, thin and stooped over, had entered the movie late, couldn’t see a thing in the dark, and was working his way blindly down the back of our row, using his hands – and our heads – to guide him along!

I didn’t know it at the time, but that screening of Fire Down Below in late-1997 would be my last-ever visit to the Vineyard Twin. By then, I’d moved from my apartment in Escondido to one in Poway, about a half-hour drive away, and I was now spending my movie-going days and nights at other theaters around the San Diego area. At some point, the place became a second-run discount theater, and in 1998, after Regal merged with Edwards and opened an 18-screen multiplex in nearby San Marcos, they closed the Vineyard Twin forever, quietly and with little fanfare. Eventually, the entire Vineyard shopping center was torn down, save that one restaurant building, and an Albertsons supermarket – and its parking lot – went up in its place.

Looking back, I wish I’d known of its closing beforehand; I would’ve stopped by and visited once last time, and seen whatever movie happened to be playing there that day. I could’ve even stopped by Swenson’s for a chocolate shake afterwards, or browsed the shelves at Book Works for a while, if either establishment was still there, and open for business. And yes, I did see one of those three movies listed in the ad below: Bronco Billy, with my Dad in 1980.