Below is a list of 38 films—plus one that never aired, and an anniversary special—that were shown on Disasterpiece Theatre, a weekly broadcast on San Diego’s local XETV 6 that screened—and poked fun at—bad movies on weekend nights between 1980 and 1981. The show was hosted by Sal U. Lloyd (as played by XETV employee Jay Curtis), who’d offer up skits, sight gags, and humorous subtitled comments throughout the less-than-stellar films he presented.

Though the 1981 listing is complete, thanks to a journal I kept that year, the list for 1980 is not; I’ll include more entries for that section whenever I can track them down. And the ‘Own?’ column below represents movies I own, not the actual episode of Disasterpiece Theatre. 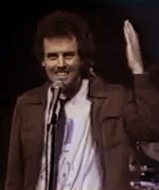