Written by Andrew Bergman, based on the novel by Gregory Mcdonald

I’m sure I’ll get some argument from those who consider Caddyshack and Vacation to be cream of actor Chevy Chase’s cinematic crop, but for my money it’s Fletch, a comedy from director Michael Ritchie, and based on the first in a series of humor-tinged mystery novels by Edgar-winning author Gregory Mcdonald. After recently watching the movie for the first time in years, I decided to give the book a read and see how it compared, and was surprised to discover that, contrary to the norm, I enjoyed the movie much more than I did its literary counterpart.

In a role that seemed tailor-made for him, and the first of several film collaborations with Ritchie, Chase stars as Irwin M. Fletcher, an investigative reporter for an LA newspaper currently at work on a drug story; while undercover, he’s approached by a man who asks Fletch to kill him, and be paid a hefty sum for his efforts. Fletch agrees, then begins to investigate that story as well, and follows a string of clues in typical detective fashion, escaping one predicament after another while charming the socks off the wife of the man he’s supposed to kill.

The story, however, was secondary to the presence of Chase, who played Fletch with a sense of frivolity and smart-ass whimsy, delivering one-liners and non-sequitur asides at every turn, and somehow making it all work. A good number of the character’s trademark lines were ad-libbed by Chase (“I’ll have a Bloody Mary, a steak sandwich and…a steak sandwich.”), and in this setting they really clicked. His dialogue was rife with these quotable throwaways, and it was this aspect that defined the film, and made it such a treat. And speaking of treat, let’s not forget Dana Wheeler-Nicholson, playing Fletch’s bright-eyed love interest, who was nothing short of absolute cute.

These aspects, in turn, were what made Fletch such a polar opposite to Mcdonald’s book. I’d assumed the film’s story would be similar to that of the novel (same murder plot, same characters), but was somewhat shocked to learn just how far apart the two were when it came to tone and attitude. While the movie was goofy, innocent fun, the book had more of a serious edge to it, and nary a likeable character in sight; the literary Fletch was distressingly more sour and negative, by a long shot, than the cinematic one. Thank heavens the movie didn’t follow its lead in that regard.

Although if I’d had my way, I would’ve stuck closer to the book’s mystery origins and investigative reporting angle, and relied less on the occasional moments of juvenile silliness, overboard disguises, and that awful Harold Faltermeyer synth-pop soundtrack. Whether this was the fault (or preference) of director Ritchie is unclear, but in the long run those few negatives were thankfully offset by everything that went right. And if I still had my way, I would’ve found more screen time for Richard Libertini, as Fletch’s easily-riled editor, and Geena Davis, as Fletch’s perky colleague; their interactions with Chase were quite engaging, and it’s a shame we didn’t get to see them together more often.

And just think, we could’ve lived in a world where such movies as Spies Like Us and Caddyshack II didn’t exist, and instead had years and years of Fletch movies to entertain us; Chase could’ve ridden this gravy train forever, but for whatever reason it never came to be…and admittedly, the much-inferior Fletch Lives didn’t help matters much. And though Fletch as a straightforward detective thriller is a disappointment, as a detective thriller comedy it’s exceptional, and remains one of the few shining lights in Chase’s long and sometimes questionable big-screen career.  (7/10) 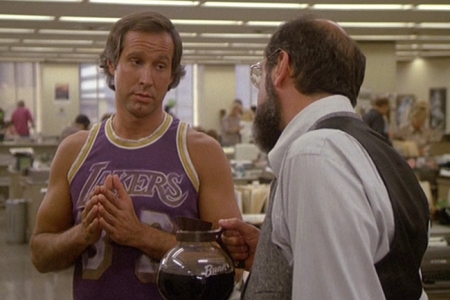