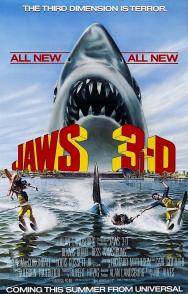 Back in 1978, when I was 15 years old and Jaws was already my all-time favorite movie, I was of course excited about the release of Jaws 2 that summer. I was still somewhat a wide-eyed kid then, with not a lot of movie experience under my belt, and didn’t yet understand that sequels to good movies tend to stink. Five years later, I was 20 years old and a bit more movie savvy, and suddenly I wasn’t all that trusting of sequels anymore. Which is why I never bothered with Jaws 3-D until now, over three decades later, when I decided to take a chance on a viewing for this year’s Jaws Month.

And was it worth the risk? Well, not really, but tell me if this rings any bells: three disparate people—a man named Brody, a marine biologist, and a tough-as-nails shark hunter—join forces to stop a great white shark from terrorizing a small, Eastern seaboard community. The leader of this community, who’s blind to what’s happening, wants to keep tourists swarming into the locality to spend their ‘summer dollars’, even if doing so may ‘harm some bathers’. In the end, the shark is killed when a metal canister lodged inside of it detonates, sending its oversized carcass straight to the ocean floor.

Yes, it was Jaws all over again, as Dennis Quaid, playing the adult son of Amity police chief Martin Brody, must contend with another bothersome killer shark, which has set its sights on SeaWorld aquatic park in Orlando, Florida. Playing his girlfriend is Bess Armstrong, a senior biologist at the park, who butts heads with a rugged Australian adventurer over whether to kill the shark or capture it alive. Lou Gossett Jr is the SeaWorld park manager, who despite the obvious dangers wants to keep the venue open for the grand unveiling of its newest attraction, which will boost attendance, increase gate receipts, and put hundreds if not thousands of innocent lives in danger.

This film was bad, plain and simple, and only the thinnest of connecting threads—Chief Brody’s two sons as grown-up characters—kept it from joining the likes of Orca, Tentacles, and Grizzly as yet another unrelated rip-off of the original classic. The director, Joe Alves, worked on the previous two Jaws films as a production designer, but didn’t have much to offer here, and I don’t know whether to blame him or the video transfer for the dreary and grainy cinematography. The 3-D effects, now presented in flat 2-D, were even more miserable, and not helping the situation was the screenplay—co-written by Richard Matheson!—which was clumsy and too often implausible, especially where shark logic was concerned (a great white that swims backwards…and roars?).

But wait: if I thought Jaws 3-D was so horrible, then why the generous two-star rating? Well, first and foremost was the presence of a young Lea Thompson, cute and delightful in her screen debut, whose scenes alone made everything else worth sitting through. Also memorable was a shot by director Alves, showing our shark silently gliding out of the shadowy darkness towards a pair of divers working on an underwater tunnel (see the murky image below). And strangely enough, I was thoroughly captivated by the playful camaraderie and genuine fondness for each other displayed by Quaid and Armstrong, whose characters seemed to belong in an entirely different film altogether…a fun romance adventure perhaps, with the sunny shores of Tahiti as a backdrop and not a damn shark in sight.

There’s a twist that’s revealed at about the hour mark that sets Jaws 3-D apart from its predecessors, and it’s one I’m not going to spoil, in case you actually want to watch this thing, but trust me, it’s really not that big a deal. Unless you’re a fan of Miss Thompson or have a mania for shark movies, I’d say avoid this clunker at all costs. And for you Jaws completists who feel compelled to follow the series story path paved by the first two entries, I’ll offer the same advice: just don’t. Are there worse movies out there than this one? Sure…just ask anyone who’s seen Jaws: The Revenge.  (2/10)