Written by David Cronenberg, from the novel by William S. Burroughs

Well, where to begin? This review is going to be about as screwy and pointless as the movie was, so please bear with me. (And, at any time, if you feel like baling out of this review, please feel free to do so…I won’t mind one bit). Besides Naked Lunch, I’ve now seen three Peter Weller movies (The Adventures of Buckaroo Banzai, Robocop, and Screamers) and five from director David Cronenberg (including Scanners, The Dead Zone, and The Fly), and I can say with the utmost sincerity that Naked Lunch is the weirdest, most confusing, most uncomfortable, most perverted, and by far the least enjoyable of the bunch.

I thought I might take a stab at describing the story without the benefit of checking IMDb, Wikipedia, or any other sources for assistance, and I purposely steered clear of reading any reviews of this film, whether by professional reviewers or by blogging amateurs like myself, so I could relate my own unadulterated take on the twisted plot elements and happenings on-screen without their influence. So what I’m about to describe will probably be way off the mark, and will no doubt be ridiculed by those who understood and enjoyed the film, but I’m okay with that…it’s a cross I’m more than willing to bear.

From what I could ascertain, Weller plays an insect exterminator in 1953 New York City, who one day discovers his wife shooting up with the roach powder he uses on the job. He’s then arrested for possession of drugs, he’s introduced to a large beetle-like bug who speaks to Weller from an orifice on its back, and he’s soon involved with even bigger bugs, recreational drug use, homosexuality, an organization of secret bug agents, a murder, an odd fascination with typewriters…lord, never mind. I had no idea what was happening, and probably never will. This was without a doubt the most bizarre film I’ve ever seen, and as you’ve guessed by now, I didn’t understand one minute of it. Not ONE.

I’d read beforehand that Burroughs’ 1959 novel was unfilmable, and though I’ve never read the book, I’d have to agree; it’s not only unfilmable, but it still is. Admittedly, I’m probably not the right audience for this film, nor the right person to write a review of it and expect others to follow my lead. I’m oftentimes quite literal-minded when it comes to watching movies, and I take things as they’re presented to me, and not as a metaphor, or a veiled representation of something else, or in this case, as a nonsensical nightmare posing as some sort of abstract reality.

And perhaps that’s what happened to me here (tenfold, I might add). At one point while I watched, I began to wonder if Naked Lunch was autobiographical, and was merely the author’s drug-induced thoughts and writing experiences expressed in cinematic form. Well, trust me, if I took some of my half-whacked dreams and turned them into a two-hour film, I’m quite sure no one would garner any entertainment or educational value from them either, save for maybe my brother, whose dreams are often as off-kilter as mine. The thing is, we get a kick out of sharing them with each other, but that doesn’t necessarily mean friends and family—and audience members—want to be subjected to them as well.

So in the end, did I find anything worthwhile about Naked Lunch? Not much, but if I were to rate it categorically, I’d say it gets an 8/10 for Cronenberg’s direction, a 9/10 for the bug effects, and a 10/10 for the cast and crew having the guts to make the damn thing. But from a straightforward movie-watching standpoint, I’m giving it a 2/10: I did not enjoy the experience, and I would not recommend the experience to others. Years ago, I saw an episode of The Simpsons where Bart and his friends saw Naked Lunch at a theater, after which one of them stated, “I can think of at least two things wrong with that title.” Well, trust me, I can think of at least two dozen things wrong with this movie.  (2/10) 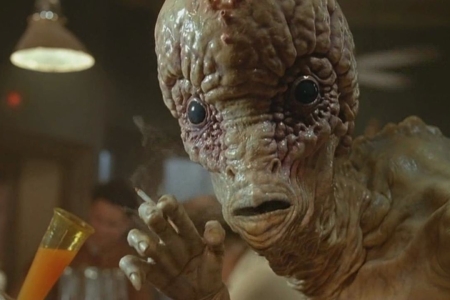