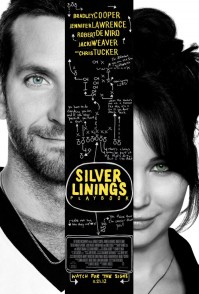 Though I’ll probably get beaten and flogged and possibly tasered for saying this, I might as well get it over with, and get right to the point: I did NOT like this movie. In fact, I thought it was one of the most irritating and obnoxious films I’ve ever seen, and the fact that it’s up for so many awards has me flat-out mystified.

For those of you still with me, here’s the story: Bradley Cooper plays Pat Solitano, fresh out of a mental hospital and living with his parents, who tries to reconcile with the wife who left him, to figure out the female acquaintance who suddenly takes a shine to him, and to understand his equally-disturbed father, a die-hard Eagles fan who resorts to illegal bookmaking to realize his dream of opening a restaurant. Not surprisingly, all of this was wrapped up in a tidy bundle by film’s end, at which time I threw a brick at the screen and banged my head repeatedly against the nearest drinking fountain.

I know I’ll be one of the few dissenting voices here (and worldwide, I’m sure), but in my opinion there are better ways to spend two long hours than with an annoying Cooper and his bipolar disorder, and a superstitious Robert De Niro and his gambling issues. The only person—the only person—I gave two flying leaps about was Jennifer Lawrence, who kept her fragile character grounded and honest, and thus made her worthy of our attention and time. She was the film’s saving grace, and along with the surprisingly well-played dance contest and heartfelt wrap-up, kept me from punishing this project with a one-star rating.

And though the acting was fine, and the camerawork of director David O. Russell acceptable, I found incredible fault with Russell’s screenplay, which to me seemed contrived, awkward, and to some extent, phony. If you want my opinion, unless you’re a fan of Jennifer Lawrence, I say skip this so-called romance comedy; otherwise, based on the thousands of honors that have already been bestowed upon it, I may be the wrong person to listen to when you make your decision regarding Silver Linings Playbook.  (3/10)