Written by Joe Gannon and Tedi Sarafian (as Crispan Bolt)

A purposely-dramatic line of dialogue my brother and I created for this movie when it was first released—My God, I think I’m having a solar crisis!—could very well be the best thing to come out of this lumbering $55,000,000 paperweight. And the funny thing is, based on the film’s equally-dramatic title, we both knew it was going to be an out-of-this-world cheesefest, and chose never to bother with it. Now, twenty-plus years later, I decided to find out for myself if we were right in our assumptions.

Of course, that meant having to suffer through this mess, a cheaply-made and embarrassing sci-fi bomb that left me dizzy with boredom, and whose story blatantly pilfered from far too many better sci-fi films of the past: 2001: A Space Odyssey, Star Wars, Blade Runner, Star Trek, Alien…believe it or not, even The Road Warrior was meddled with! And if you want more proof of this outright thievery, look no further than the name of one of this film’s lead characters: Borg. What? A certain next-generational sci-fi series was still in its prime, and you had the gall to name a character Borg?

Trust me, the eye-rolling didn’t end there; not only was the look and presentation below cable grade, and the story borderline nonsensical (a giant solar flare is going to destroy most of the Earth, throwing the planet into—wait for it—a solar crisis), but the acting and line delivery were equally deplorable; it was as if the actors knew they were in a clunker, and had already given up long before production had wrapped. I felt sorry for those involved—Charlton Heston, Tim Matheson, Peter Boyle, Jack Palance—and wondered if having to recite this laughable dialogue made their work all the more miserable.

As far as I could tell, this was never released theatrically in the US, and it’s not hard to see why: by the time I’d reached the climactic conclusion, and situations had become awkwardly metaphysical, I decided that, if I’d been subjected to this in a theater, I would’ve walked out on it, and demanded twice my money back. However, after all was said and done, what bothered me most about Solar Crisis was the fact that I hadn’t forced my brother to suffer through it with me.  (2/10) 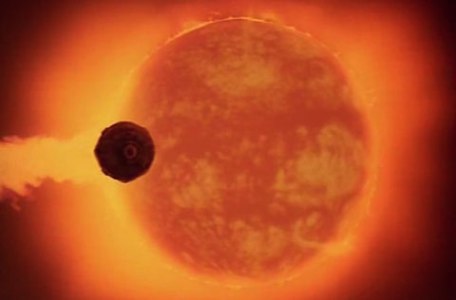