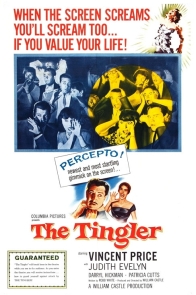 In the 1950s, actor Vincent Price made the jump to horror cinema and never looked back, rounding out the decade with such chillers as House of Wax, The Fly, and in 1959, The Tingler, a low-budget creature feature and his last of two collaborations with B-movie producer and director William Castle. Here, Castle used one of his many cinematic gimmicks, called ‘Percepto!’, to add a little jolt to the story of a scientist who discovers the existence of a centipede-like creature in the spines of humans, which thrives and grows on fear, and can only be stopped by the hosts screaming their terrified heads off.

Price stars as Dr. Warren Chapin, a pathologist who in his free time studies and experiments with fear, and its effects on the human body. While performing an autopsy on a convict who died in the electric chair, he discovers the man’s vertebrae is cracked and splintered, but not by electrocution. He blames it on the ‘force of fear’, a phenomenon which occurs when people become extremely frightened just before they’re going to die. Chapin writes ‘death by electric shock’ on the convict’s death certificate, but later, while taking x-rays of a test subject’s spine, he’ll discover something the rest of us knew all along: the true culprit was…the Tingler!

In select theaters during screenings of The Tingler, several chairs were equipped with buzzing devices, which would suddenly shock the pants and skirts off seated patrons during climactic scenes involving the tingling parasite, eliciting the expected screams and panic. On-screen it was a simple, laughable premise that, if you accepted it, was actually effectively done, with several creepy moments and, as usual, a solid and believable turn by Price, and an appealing one from Darryl Hickman, playing Price’s assistant. There was also a murder angle to the story, but oddly, none of the characters seemed too concerned with it, and the murderer was treated as if he’d just committed a jaywalking offense.

Like Roger Corman, Castle put some interesting ideas on the screen, and had a deft hand behind the camera; the deep-red blood pouring from bathroom faucets—in a black-and-white film—during a nightmare sequence was one eye-opening example. The Tingler was a prime slice of cult-classic horror filmmaking, with a surprising dose of smarts and fun thrown into the mix, and a nightmarish slug creature to boot. And seriously, who wouldn’t want to live in an apartment right above an old-time movie theater?  (7/10)

6 comments on “The Tingler”