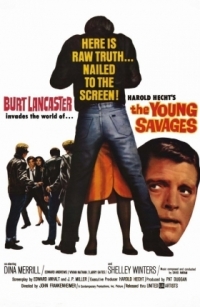 Written by Edward Anhalt and J.P. Miller, from the novel by Evan Hunter

I first saw this film when I caught it by chance on Turner Classic Movies, when I was in the mood for a movie and had decided that, no matter what was starting on TCM at that particular moment, I was going to watch it. And that movie was The Young Savages, and after the opening credits sequence had run its course, I knew I’d lucked out: a crime drama starring Burt Lancaster, written by Jeremiah Johnson and The Sniper scribe Edward Anhalt, and directed by John Frankenheimer.

As I expected, this combination didn’t let me down; I’ve been a fan of Frankenheimer’s since I first saw his espionage thriller Ronin, and especially so when I discovered he also directed Lancaster—and my uncle, who was Lancaster’s stunt double—in The Gypsy Moths. With The Young Savages, the story began with a trio of New York City gang punks knifing a blind teen from a rival section of the neighborhood, then it took off from there as the boys had to deal with not only the consequences of their actions, but with district attorney Lancaster and police detective Telly Savalas, who wanted the three hoodlums brought to justice.

Frankenheimer showed us this with the use of some well-designed visuals, excellent staging of actors and backgrounds, a fast pace, and a great feel for the streets of Harlem and Manhattan, all of which were enhanced by his black-and-white photography and a camera whose lighting, shadows, and deep focus gave off a definite film noir vibe. Another of the film’s strengths was the acting of Lancaster, whose presence on the screen commanded your attention, and along with Savalas’ tough, no-nonsense cop, supplied the film with its primary focal point.

And like the story dynamic of 12 Angry Men, the case was unraveled bit by bit, and continued to build and build towards its courtroom climax, as Lancaster spent the bulk of his time fact-finding, questioning witnesses, and tracking down leads before assuming the role of prosecutor in court, a concluding sequence that unfortunately didn’t deliver the punch I’d hoped for, and merely simmered when it should’ve boiled over. Still, not a bad way to spend a movie-watching evening, and for fans of Lancaster and/or Frankenheimer, you shouldn’t be disappointed.  (7/10)

2 comments on “The Young Savages”