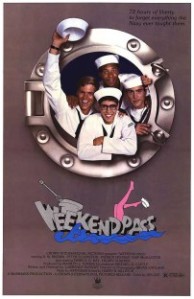 Well, they got the ‘pass’ part right, which is what a person should do if they were looking for something along the lines of a Risky Business or a Fast Times at Ridgemont High. Sadly, what we have here is a no-brain, goofball, and at times oddly endearing mess of a film from the fine folks at Crown International Pictures, who normally provide some sort of entertainment value when they release these low-end comedies. This time, however, they really missed the mark, and what we were left with was a misguided attempt by the filmmakers to fashion some sort of teen sex comedy out of a 72-hour weekend pass, without the benefit of teenagers, sex, or comedic intervention.

Actually, a lot could’ve been done with the ‘sailors travel to big city for shore leave’ storyline, but writer and director Lawrence Bassoff somehow found a way to escape that obvious trap.  He chose to direct his script simply and without pizzazz, and his scenes suffered from a lack of energy, too many awkward moments, and some fairly tedious plot developments, punctuated by one of the most embarrassing dance sequences this side of Mac and Me. Still, I was pleasantly surprised to see the characters had learned a few lessons along the way, especially after each sailor had to deal with troublesome personal situations that were putting a damper on their weekend.

For you uninitiated, four happy-go-lucky sailors—Webster, Fricker, Bunker, and Lester—graduate from basic training in San Diego, pile into a rented Jeep, and amidst a montage of famous landmarks head north to Los Angeles for a weekend of debauchery, rude behavior, destruction of property, and an endless parade of sexual hijinks…or so you’d think. Interestingly enough, instead of acting like boorish jerks, out causing trouble and leaving a swath of destruction in their wake, these gentlemanly nerds took part in probably the tamest liberty in US Naval history, either stateside or overseas.

Seriously, these guys were utterly harmless, and wanted nothing more from their three days of freedom than to stroll Venice Beach, exercise at a fitness center, check out a stand-up comedy show, and cruise the streets of a neon-lit LA. Granted, their intentions were strictly hormonal—each wanted to hook up with a girl before Monday—and they did begin their weekend at a strip club, but these actions were carried out, for the most part, honorably. Even the hiring of an Asian masseuse, to handle the below-the-belt needs of the foursome’s resident geek, resulted in nothing more than a comedic back rub! C’mon, I’ve seen more raucous behavior in a mausoleum!

As you’ve probably guessed, everything wrapped up on a positive note, with the guys going their separate ways to begin their military careers, and promising their sweet new girlfriends that they’d never forget them, and would be back to see them soon (and collect a receipt for that rental Jeep the girls presumably returned). And though it was fun to see the sights of a bygone LA, and I appreciated that these four couples weren’t mean-spirited clods, that didn’t change the fact that the film was an unfortunate misfire, and if you want my opinion, the 1984 of Weekend Pass will make some viewers yearn for the Orwellian vision instead.  (2/10)